You can read the latest edition below, and subscribe to have the next newsletter delivered straight to your inbox.

You may have seen online chatter referring to “PCR test cycles”, or “Ct values”, but did you understand what those terms meant? This week, we’ve spoken to an expert to explain — in simple terms — how PCR tests are processed in order to make a positive COVID-19 diagnosis.

Meanwhile, in vaccine news, we’ve fact checked a claim from Labor’s Chris Bowen about the number of Pfizer vaccines snatched up by the rest of the world before Australia managed to secure its deal.

A year into the pandemic, COVID-19 tests remain misunderstood. Here’s how they work.

But the way in which the tests work and are analysed is something “most people don’t understand”, according to Julian Druce, who is the head of the virus identification laboratory at the Doherty Institute.

Indeed, claims spread widely on social media posit that governments can change the way they use the tests in order to manipulate COVID-19 case numbers and that the World Health Organisation (WHO) has “admitted” the tests have been responsible for inaccurate case tallies.

At the heart of such claims lies the little-understood concept of PCR test cycles and cycle threshold (Ct) values, which are used to identify the presence of COVID-19.

According to Dr Druce, PCR tests for COVID-19 are analysed through “about 40 to 45 heat and cooling cycles”, with most tests in Australia capped at 40 cycles.

“At the end of each cycle, the instrument shines a little laser through the reaction well and takes a reading,” Dr Druce said.

“Slowly, over time, when there’s a sufficient signal in that reaction, you get a glow, like a fluorescence, and that’s plotted on a graph.”

The Ct value of a positive test is the number of cycles it took before the signal was able to be identified, Dr Druce explained, with higher values equating to a weaker positive due to less virus being present in the sample.

A person returning a positive PCR test with a Ct value above 30 would be “very unlikely to be infectious”, Dr Druce said, before adding that most positive results were detected in the range of 20 to 30 PCR cycles.

“People being detected in the 30-plus Ct range usually means they’re being detected late, generally because they don’t have symptoms and they’re just being tested arbitrarily,” he explained.

“They don’t know where they are in the disease course because they have no symptoms, which is 40 per cent of COVID-19 patients.”

It was possible, but very rare, that a high Ct value could also mean a person was in the very early stages of their illness and not yet symptomatic.

“[This scenario] is most likely to happen when a ‘household’ has a positive case and the rest of the known household or contacts are being screened.”

What have the fact checkers said?

On social media, claims about PCR tests and Ct values have proliferated throughout the pandemic, and continue to be spread.

In one example, a widely shared (but since deleted) tweet suggested that the WHO had issued advice to countries to reduce the number of PCR cycles undertaken in test analyses as the “current cycle was much too high” and resulted in “any particle being declared a positive case”.

Fact Checkers at AAP found that claim to be false.

“The guidance does not advise laboratories to reduce the ‘cycle count’ to improve the accuracy of [a] PCR test, nor does it identify that current approaches were leading to a high number of false positives,” the fact checkers said.

“Rather, it reminds test users to undertake ‘careful interpretation’ of weak positive results and to adhere to manufacturer’s instructions.”

Other fact checkers, meanwhile, took aim at similar claims about the WHO’s advice being linked to the inauguration of US President Joe Biden.

According to the poster, the change in advice meant a single positive COVID-19 test would no longer be enough for a case to be classified as positive. Asymptomatic people, the poster claimed, would also not count as positive cases.

“So hundreds of thousands of cases that have been documented now suddenly were not, in fact, positives and now will not count. It is amazing how low the numbers are going to be now.”

But USA Today reiterated that the WHO guidance made no mention of changes to the Ct value needed to diagnose a positive case; rather, it urged labs to follow the manufacturer’s instructions.

Nor was there any evidence a single positive test would no longer be counted as a COVID-19 case.

“There is no evidence to suggest asymptomatic individuals will no longer count toward positive COVID-19 cases,” the fact checkers said.

Was Australia slow off the mark in securing the Pfizer vaccine?

Australia’s vaccination rollout is underway, but the opposition has been criticising its speed, seeking to link the slow rate of vaccination so far to the Morrison Government allegedly being late to the game in signing vaccine contracts with the big pharmaceutical companies.

In January, former opposition health spokesman Chris Bowen claimed Australia was at the back of the queue for the Pfizer vaccine — not at the front as the Government has claimed.

“[B]y the time the Morrison Government did a deal with Pfizer, a billion doses had already been accounted for around the world,” he said.

But RMIT ABC Fact Check found his claim to be drawing a long bow. 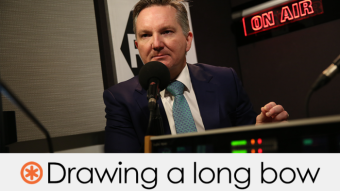 Former opposition spokesman for health Chris Bowen says a billion doses of Pfizer’s COVID-19 vaccine were accounted for around the world before the Government made a deal with the company in November.

While there’s no publicly available or official tally of vaccine deals made by country, Fact Check’s count, compiled from government and corporate media releases, suggests the tally was around 350 million.

Mr Bowen’s number of 1 billion would only be reached if an ambiguously dated deal with the EU was included, as well as options for countries to purchase doses at a later date.

The larger issue was the optional doses, which numbered over half a billion, including those in the EU deal.

Experts had mixed opinions on whether or not these optional doses should be included, but it’s clear they cannot be treated in the same way as other pre-purchased doses.

Mr Bowen’s claim lacked the necessary context to allow audiences to understand the true status of more than half the doses in his count of 1 billion.

While the United Kingdom is now home to the fifth-highest number of COVID-19 cases globally, and under a strict lockdown, in August last year residents were being encouraged to flock to restaurants under the “Eat Out to Help Out” scheme.

But did that scheme, in which the Government footed half the bill for food and non-alcoholic drinks on Mondays, Tuesdays and Wednesdays, lead to a surge in cases?

According to UK-based fact checkers Full Fact, a non-peer reviewed academic paper published back in October suggested that the government scheme was responsible for 8-17 per cent of “new infection clusters”.

“This would mean it caused more Covid infections to happen, but not that it caused a rise of total infections by 8 to 17 per cent,” the fact checkers said.

“This study found that areas with a higher rate of uptake in the scheme were more likely to experience a new Covid-19 infection cluster.”

Full Fact noted, however, that the paper itself referred to the 8-17 per cent figure as a “back of an envelope calculation” and that some experts had warned against relying too heavily on the paper’s conclusions.

In other news: Claims about Seuss don’t have much juice

Suggestions have run wild this week that popular children’s author Dr Seuss (real name Theodor Seuss Geisel) has been “cancelled” after his books were supposedly banned by a US school district and taken out of circulation.

But that’s not quite right.

According to fact checkers at Reuters, a school division in Virginia had not banned Dr Seuss books for not including enough “minority characters”, as some have suggested. Rather, the division had chosen not to make the author the centre of “National Read Across America Day” celebrations.

“The district said it aimed to encourage children to read a diverse range of books rather than celebrate a single author, although it also cited ‘strong racial undertones’ in some Dr Seuss work,” Reuters said.

PolitiFact, meanwhile, set the record straight on President Joe Biden’s involvement in the furore after it was claimed he “took down” Dr Seuss.

According to the fact checkers, Dr Seuss Enterprises announced on March 2 that it would cease publishing six of the author’s books after criticism for “how they depict Black and Asian people”.

“[President Biden] was not involved in the decision to remove the Seuss titles from publication,” PolitiFact said.

Got a fact that needs checking? Tweet us @ABCFactCheck or send us an email at factcheck@rmit.edu.au