When nearly 5,000 LGBTQA+ young people were asked what makes them feel good about themselves, the answers that stood out the most were remarkably simple.

One 17-year-old respondent answered: “When I’m laughing with my friends and I’m able to forget anxiety and depression because I love them and they make me happy.”

Another wrote: “Being surrounded by people that understand,” while another said: “When I dress the way I want to without noticing judging stares.”

Others felt happy when helping others in the community. “I feel good about myself when I make other people feel good,” said one, while another listed, “helping others, especially when I help them grow in their gender identity or sexuality or helping with mental health issues.”

La Trobe University professor of public health Adam Bourne was one of the authors of the national survey, entitled Writing Themselves in 4, which surveyed 6,418 LGBTQA+ young people.

“What I was fascinated about in these answers is that people are asking for the most ordinary of things,” Dr Bourne said.

“A connection to friends and family around them might sound like a really basic thing, but when you’re from a marginalised community, having people who understand you and are willing to affirm you for who you are is really remarkable and amazing.

“But that hasn’t always been the case. Lots of LGBTQA+ people haven’t felt supported by friends and family when they come out.”

He said the 4,754 people who answered the question fundamentally wanted acceptance by their peers and families, freedom to affirm and express their identity, and feelings of safety.

“Fundamentally, what people were looking for was to be able to dress the way they wanted to — in a way that affirmed their gender identity — and people to not stare at them, to not make judgments about them, to not harass them,” he said.

“Not feeling unsafe was really at the heart of it. But the rest of the survey findings tell us that an awful lot aren’t able to have that a lot of the time.”

Advocacy important for many LGBTQA+ youth

Alexander Dalton is an 18-year-old transgender man from Werribee in Melbourne’s west.

Alongside his year 12 studies, he works on advocacy projects with youth mental health organisations Headspace and Orygen.

He said advocacy work was about “reaching that kid who is struggling, but also trying to build a better world where they don’t have to struggle.”

“It definitely makes me happy and makes me feel like I do have a purpose, which was something that I struggled with for a long time,” he said.

Dr Bourne said many LGBTQA+ people were strongly motivated to provide support to their peers.

“There’s a recognition of the common challenges experienced among the LGBTQA+ community,” he said.

“Those who have it a bit better often recognise that they need to do their bit to help support those who are less fortunate.”

While some of the survey’s other results were positive — including a finding 88 per cent of LGBTQA+ young people were supported by friends when they came out — other numbers were more troubling.

The majority — 97 per cent — of trans and gender-diverse respondents reported wanting to affirm their gender identity socially — for instance, by changing their name, pronouns, or gender presentation.

However, one in three of that group reported feeling this process had been denied to them. Nearly half felt their social gender affirmation had been delayed.

Blake Velden, from Knoxfield in Melbourne’s east, says he was excited to come out as trans to his friends.

“There’s anxiety around anything to do with sexuality or anything coming out, no matter how progressive all the people are around you,” he said.

“But I think I was mostly just excited to tell everyone.”

But he ran into barriers when he tried to affirm his gender with his parents.

“I crumpled a little bit. I went back to using they/them/theirs pronouns as a compromise, and I started dressing more feminine.

“That went on for a year and it didn’t feel good, so I was like, ‘why do I need to compromise?’ So I stopped.”

Alexander similarly encountered trouble with his parents throughout the process.

“For about a year and a half after I came out, my parents were dead against it,” he said.

Paige spent 16 years of her life searching for family love and support. She’s finally found it 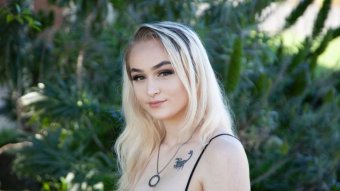 All Paige Birkett ever wanted was a loving family home, but it took her 16 years to find one. Youth residential care advocates say additional government funding is a start, but the system still fails to provide stability for children like Paige who desperately need it.

“They were like, ‘we’re not going to let you do anything until you turn 18’, and that included name changes, the way I dress socially.

“And that was the point where my mental health was at its worst, because I knew that I wasn’t going to make it to 18 if that was the case.”

The survey found 87 per cent of all trans and gender diverse participants were misgendered in the past 12 months. This was mainly perpetrated by family, classmates, and teachers.

Blake is still waiting to receive hormone replacement therapy and says he understands some people can accidentally misgender him.

“Some people make mistakes, just because of my appearance and my voice,” he said.

“It’s just like an assumption to the brain. But that’s okay. As long as I know that they’re trying and they accept me, I think it’s all good.”

Some schools ‘amazing’ but results less promising across the board

“I had to wait until the next term for them to rewrite my name on the roll and for the teachers to have a talk to all the other students,” he said.

“I had to just wait. Being a trans person is a lot of waiting and being stuck.

“It’s really sad, because not a lot of trans people make it through the waiting.”

Alexander’s Catholic school took “amazing” actions listening to him and facilitating the changes needed, he said.

“I left for the holidays and came back in a new uniform with a new name, and no one had any issues,” he said

“The school had a student go through the same process about a year before me, so they already had a plan worked out and I’m really grateful for that.”

Dr Bourne said Alexander and Blake’s experience at school was unfortunately far from the standard, with 60 per cent of respondents reporting they felt unsafe or uncomfortable at secondary school due to their sexuality or gender identity.

“I think it’s amazing that young people are feeling affirmed in the school setting, but that isn’t necessarily the case for quite a large number of people,” he said.

“There’s still a really long way to go in ensuring a good quality of education and a safe environment for all LGBTQA+ people, but it’s particularly exacerbated among trans and gender diverse people.”

Setting a precedent so ‘someone else doesn’t have to fight’

Alexander said ultimately he wanted to use his voice so other young people don’t have to fight the same battles he did.

“I’m privileged enough to have my parents support me, to have a safe and stable environment, and to have enough access to services to be able to speak publicly and advocate for what I believe in,” he said.

“I feel in some ways obligated to do that because that’s not something that a lot of people have.

“If I can change things and set that precedent, then someone else doesn’t have to fight for it.”