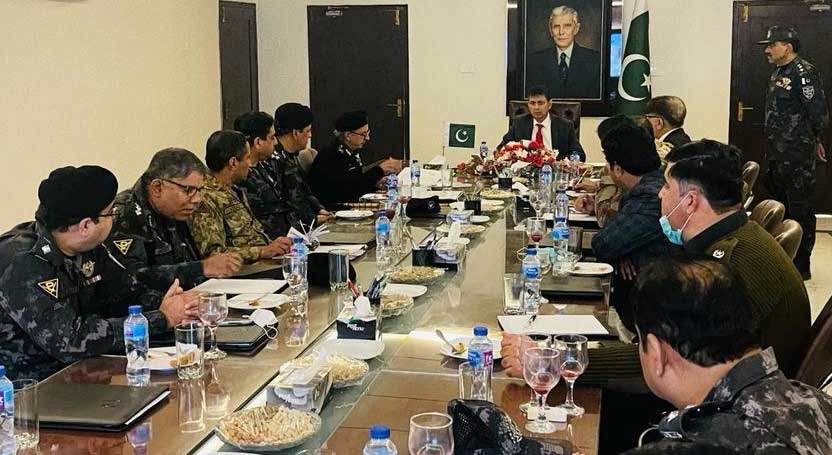 ISLAMABAD: On the second day of his visit to Quetta, Chairman FBR/Secretary Revenue Division, Dr. Muhammad Ashfaq Ahmed, spent a busy day at Pakistan-Iran border and visited Customs House, Taftan Saturday. He was accompanied by Dr. Muhammad Saeed Khan Jadoon, Member (Customs Policy) FBR, Muhammad Sadiq Chief Collector Customs (Balochistan) and Rashid Habib Collector Customs, Appraisement, Quetta. The Chairman was warmly received by the officers and staff of Appraisement and Enforcement Collectorate at Juzak Airfield.
During the visit, Colonel Asad, General Manager, NLC, Quetta briefed the Chairman about different initiatives taken by NLC for the traffic management at Taftan and further apprised him about future projects of NLC. Later, Chairman FBR visited Bazarcha Zero Point and discussed its reopening with Frontier Corps and District Administration. He remarked that the issue of allocation of land for Bazarcha would also be taken up with the Chief Secretary, Balochistan.
The Chairman then visited Pakistan-Iran border and newly established NLC Border Terminal at Taftan. He directed the NLC authorities at Taftan to provide facilities for the Customs staff, traders, and the passengers. He visited the Customs Baggage and Immigration Hall where he was briefed by the Additional Collector Enforcement and FIA authorities.
He also visited newly constructed Customs Complex and appreciated the efforts of the Collectorate of Appraisement for establishing the infrastructure in the far-flung area. He directed to renovate the building to make ample space for the residences of officers and officials being posted at Taftan.
He further directed to complete the project by the end of February, 2022 before he visits Taftan again. He also inaugurated the mosque constructed by the Pakistan Customs with the assistance of local traders.
Afterwards, the Chairman held a meeting with the local notables led by Ejaz Khan Sanjrani and consisting of influencers and businessmen from Taftan, Mashkel and Nokundi. They expressed their concerns over the closure of Bazarcha Border Point at Mashkel.
Chairman FBR assured the delegates that Bazarcha will soon be re-opened after fulfilment of all necessary legal formalities. He also informed the notables from Mashkel that the re-opening of Customs Station Katagar will be planned in consultation with all the stakeholders.
Last but not the least, Chairman FBR held an important meeting with the Iranian delegation comprising DG Customs Seistan & Balochistan province, representatives of Ministries of commerce, Transportation, Foreign Affairs and Border Security who presented a charter of demands.
He assured the Iranian delegation of his fullest support in strengthening mutual cooperation and promised to involve the Federal Government in ensuring the required intervention at policy level. He directed the Chief Collector, Customs (Balochistan), to resolve the operational issues on top priority.