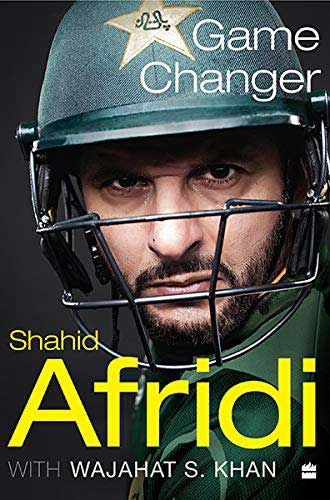 The careers of cricketers are fast and short. By the time cricketers are in their late 20s or early 30s, they are regarded to be in their prime. They begin to show rust and before you know it, they announce their retirement. In the midst of these players are those who set the pace and change the game. Pakistan cricket team also had a certain player – eccentric and bold, charismatic and brave. His fast run-scoring ability was often marred by losing his wicket by playing an unusual shot. But whenever he came out to bat, he was welcomed by cheers. Every time he hit a four or a six, it was duly acknowledged. He was born as Sahibzada Mohammad Shahid Khan Afridi but his fans call him Boom Boom.
Shahid Afridi’s career is explained beautifully in Game Changer, the autobiography co-written by Wajahat S. Khan. Afridi’s insights into his career and Wajahat’s writing prowess combine to form a powerful expression of thought. The foreword is written by Wasim Akram, Pakistan cricket team’s former captain with whom Afridi played several matches at home and abroad.
Akram writes, “Like all great discoveries, it started with a need” is how Wasim Akram begins. He further adds, “We are in a tri-series in Kenya in 1996. Mushtaq Ahmed, our dependable World Cup champion leg spinner, was injured. So here we were, stuck in Africa, in dire need of a leggie, and in comes this kid, kind of chubby but straight-edged and quiet. None of us had heard of him before.”
Certainly, people were unaware of Afridi when he first emerged as a cricketer. Afridi soon caught the world’s attention when he scored the then fastest century. Later, he became a permanent and important part of the squad. He performed well with the bat and the ball and could also dive here and there on the field – he was an all-rounder.
In a few words, Wajahat aptly describes, narrates, and explains Afridi in the Preface of Game Changer. Wajahat writes, “The Butcher. The Beast. The Boy Wonder. The Boom Boom. Our game, his way. That’s what he played.”
Afridi’s name soon became synonymous with hard-hitting batting, erratic behavior, and spontaneity. Afridi could be all that and more – he would make the nation fume over losing his wicket while playing a senseless shot, but he was needed by the same nation at times when no one else could remain cool on the field. Afridi was the gladiator who performed best under pressure. He would hit sixes and fours out of nowhere to ease the pressure off the Pakistani batsmen. Akram explains Afridi’s unpredictable nature as, “But as captain, nobody kept me on the edge more than Afridi did. One couldn’t even go to the loo when he was playing in the middle. That’s because he could change any game, anytime.”
The thirty-eight chapters of the book take the readers across the many moments Afridi experienced – on and off the field. They explain Afridi’s entry into cricket, rise to fame, performance as captain, off-the-field interactions, and the life that he lived as a national hero.
Afridi wanted to have his focus on the tasks he was performing in life – be it cricket or personal engagement. “I like taking things one ball at a time,” Afridi writes in the book. The book also reveals Afridi’s evolution from a child to a teenager, and his transition into adulthood. The book explores his life after he became the team captain. This was the moment when his fans saw maturity coming on his face and in his eyes. But his Boom Boom nature remained the same – as it was in 1996. This was, perhaps, the attribute on which he built his brand image.
The book also shows the passion Afridi had in his heart to play cricket. It was in his blood to perform on the field and to play for Pakistan on the international stage. “My cricket fever was intense in those days,” Afridi writes. “About three or four nights every week, before I slept, prior to any game or even at practice sessions, I dreamt with my eyes open. I visualized entire matches, all in my head – I’m walking into a stadium, the crowd is cheering. I’m slamming sixes…I dreamt that I was the new Imran Khan.” It was indeed his vision to be the best. This is why he became a household name in cricket-playing nations and brought fear in the bowlers of opposing teams.
The book also dwells on the dressing room politics and the cricket’s dark side. Afridi’s first-hand information presents a side of cricket we are unaware of. The book is the story of a kid who dreamed to play cricket for Pakistan and enjoyed every second of it when he got the opportunity. Afridi was not just a player, he was an emotion, a concept, a quality. As Wasim Akram writes in the foreword, “The crucial thing about Afridi is that everything he does and doesn’t do works.”