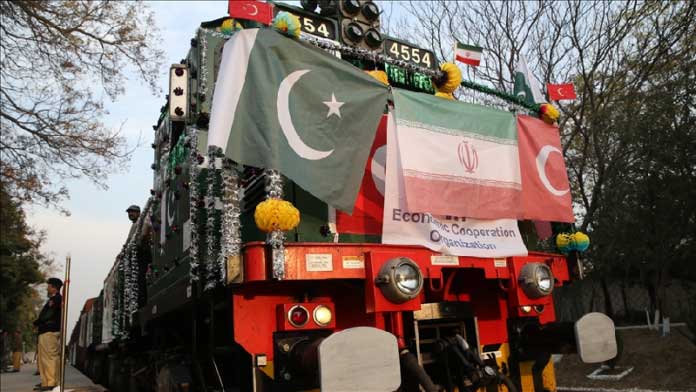 ISLAMABAD: Advisor to the PM on Commerce and Trade Abdul Razak Dawood has said that it is heartening to witness the resumption of operations of the Istanbul-Tehran-Islamabad (ITI) freight train after nine years.
Addressing the inauguration ceremony of Islamabad-Tehran-Istanbul freight train on Tuesday, the advisor said the train will complete the one-side trip in 12-days, and will go a long way in facilitating movement of goods among Pakistan, Iran and Turkey.
“I call on our exporters to take advantage of this alternative route and mode of transport and contact the Ministry of Commerce for any facilitation in this regard,” he said.
Terming it an historic event, he said the day will be long remembered. He said the Ministry of Commerce has been working continuously hard and making efforts to increase trade. “We’ve already initiated regional trade through trucks under TIR. Trucking is ongoing but the real potential is through Railways which is more economical,” he added.
Speaking on the occasion, Foreign Minister Shah Mahmood Qureshi hailed the “historic” development as a step that will open new avenues for trade and business in the region and beyond. He said an ITI passenger train could also be launched in the future to further enhance regional connectivity and economic integration.
Mustafa Yurdakul, Turkey’s Ambassador to Pakistan, said the resumption of the cargo train service is an important part of the ECO framework and vision. “This project has been on the agenda for a long time. It is a step that will improve bilateral cooperation and bolster economic and commercial exchanges between our countries,” he said, emphasizing that the rail link should be extended further to other parts of Europe.
The Istanbul-Tehran-Islamabad (ITI) cargo train was started in 2009 but suspended in 2011 due to several delays in Pakistan. The train departed from Islamabad for Europe’s largest city with dozens of containers on Tuesday.
It will cover 1,990 kilometres inside Pakistan, before crossing through the Taftan border for a 2,603-kilometer stretch in Iran. The train will travel some 1,850 kilometres in Turkey, passing through the capital Ankara before reaching its final stop in Istanbul.
Turkey, Pakistan, and Iran are founders of the Economic Cooperation Organisation (ECO), a 10-member regional cooperation bloc that was established in 1964 as the Regional Cooperation for Development and renamed ECO in 1985. The decision to resume the ITI cargo train service was taken at a ministerial meeting of ECO member states in 2020. – TLTP