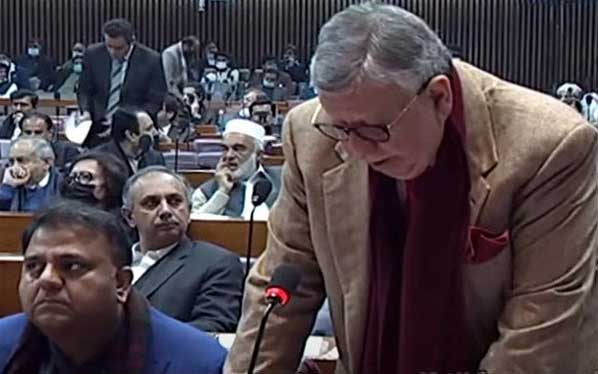 ISLAMABAD: The government tabled the Finance (Supplementary) Bill 2021 and State Bank of Pakistan (Amendment) Bill 2021 in the National Assembly amid the opposition’s protest on Thursday.
Minister for Finance and Revenue Shaukat Tareen introduced the bills in the house, which met in the chair of Speaker Asad Qaisar.
The speaker announced that detailed discussion on this legislative proposal would be held in the house and the finance bill would not be referred to the standing committee. However, the State Bank of Pakistan (Amendment) Bill, 2021 was referred to the relevant committee for deliberation.
As the session began, the opposition members tore the copies of the agenda and surrounded the speaker’s dais. An intense protest against the bills escalated into fisticuffs between opposition lawmaker Shagufta Jamani and PTI MNA Ghazala Saifi.
Speaking on the floor of the house, PML-N leader Khawaja Asif while referring to the SBP bill accused the PTI-led government of compromising on the country’s economic sovereignty. While urging the house not to approve the bill, Asif said the country’s central bank has been “handed over to IMF.”
Responding to the PML-N leader, Planning Minister Asad Umar said the bill does not suit those who invited Indian Premier Narendra Modi to their house to speak about the country’s national security.
The house adopted various resolutions extending various ordinances for a period of 120 days. These ordinances include; “the Federal Government Properties Management Authority Ordinance, 2021”, “the Elections (Third Amendment) Ordinance, 2021”, “the Public Properties (Removal of Encroachment) Ordinance, 2021”, “the Pakistan Council of Research in Water Resources (Amendment) Ordinance, 2021”, “the Pakistan Food Security Flow and Information Ordinance, 2021” and “the Tax Laws (Third Amendment) Ordinance, 2021”.
The house adopted the resolutions with a majority vote amid uproar from the opposition benches. The house was later adjourned to meet again at 11:00am on Friday.
Earlier in the day, Federal Minister for Information Fawad Chaudhry said that the federal cabinet has given approval for the finance bill.
On Tuesday last, the cabinet approved the SBP amendment bill to give absolute autonomy to the central bank in a bid to qualify for the $1 billion loan but had deferred the approval of Rs360 billion mini-budget for the second time in a week.
The bill has been approved to bring amendments in the SBP Act of 1956 under one of the conditions of the International Monetary Fund (IMF) and on the desire of the SBP governor. Many of the clauses that the federal government had earlier termed “unconstitutional” are still part of the revised bill after the IMF refused to budge from its position.
The purpose of the Finance (Supplementary) Bill, 2021 is to give legislative effect to the taxation, proposals of the federal government to achieve efficiency, equity in the tax system, broadening of tax base as well as documentations of the economy.
The executive board of the Fund will meet on January 12, 2022, to decide if it will revive the stalled loan package, approved in 2019 to rein in mounting debts and stave off a looming balance of payments crisis, in exchange for tough austerity measures.
The new finance bill will empower the government to level a uniform 17 percent General Sales Tax (GST) on goods that were taxed at 5% or 12% rates. The amendment will also enable the government to generate over Rs343 billion in additional revenue.
However, the economists say the bill will bring inflationary pressure and impede economic growth. The impact of the Finance Supplementary Bill 2021 will be highly inflationary and anti-growth, senior economist Dr Ikram ul Haq said.
“The government, instead of withdrawing exemption given to the rich, has decided to withdraw exemption of billions of items of daily use, causing further hardships for the weaker sections of society, especially fixed income groups,” he said, adding that high tax rates are detrimental for businesses. – TLTP