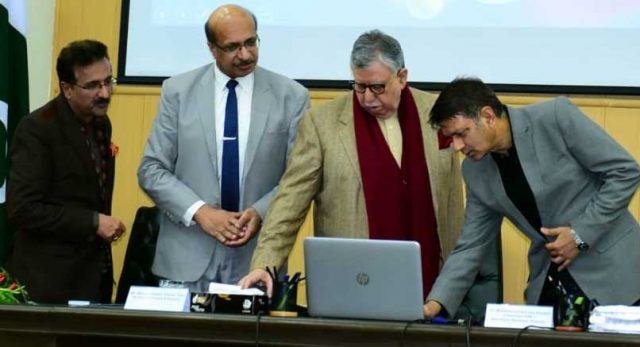 ISLAMABAD: Achieving yet another significant milestone towards automation and data integration in order to facilitate the taxpayers, promote ease of doing business and reduce compliance costs, FBR has launched its National Sales Tax Return (NSTR), this afternoon. Federal Minister for Finance & Revenue, Shaukat Fayaz Ahmed Tarin, presided the launching ceremony at FBR (HQs), Islamabad as the Chief Guest.
Speaking to the august gathering comprising of all FBR Members, dignitaries, senior officers and media representatives, Finance Minister congratulated Chairman FBR and his team for making this long-awaited initiative possible in a short period of time. “This milestone has been achieved only through a meaningful engagement of FBR with provincial revenue authorities, which is a good example of the cooperation and unity between these organizations,” he added.
He explained that due to fragmentation in Sales Tax payment, taxpayers were required to file separate Sales Tax returns every month to each of the different Sales Tax collecting authorities. “For example, a telecommunication service provider operating throughout Pakistan has to file returns every month to FBR, Sindh Revenue Board, Punjab Revenue Authority, Khyber Pakhtunkhwa Revenue Authority, Balochistan Revenue Authority, AJK Council Board of Revenue and Gilgit-Baltistan Revenue Authority,” he continued.
He termed it a very tedious and cumbersome task, which often led to errors and disputes. He further added that the reforms of Sales Tax regime earlier introduced in the Supplementary Finance Bill-2021 and the new data repository developed by FBR in collaboration with NADRA were a big leap forward towards documentation of economy and completion of VAT chain which remained severed due to distortions. He emphasized that the NSTR will be another pillar in the achievement of this objective and FBR will now be able to assess the indicative income of non-filers with sufficient accuracy and through use of technology.
Therefore, the National Sales Tax Return was developed after discussions and agreements signed with the provincial revenue authorities, hence, acceptable to them as well. The feedback from other stakeholders, including taxpayers and tax practitioners, is also very positive. It will save time and effort, and reduce compliance costs. Furthermore, this was also a key recommendation of international agencies such as World Bank.
One of the greatest benefits of this system is that it encourages harmonization of tax procedures, definitions and principles between the federal government and the provinces, which will promote national unity and cohesion.
Earlier, Chairman FBR/Secretary Revenue Division welcomed the Honorable Finance Minister on this auspicious occasion. He explained the scope and significance of Sales Tax regime and highlighted the salient features of “National Sales Tax Return”. He added that presently sales tax in Pakistan was fragmented among seven different revenue collecting authorities. Sales Tax on goods throughout Pakistan is collected by FBR for the Federal Government whereas Sales Tax on services was collected by the respective provincial revenue authorities. While this arrangement is according to the Constitution of Pakistan, 1973, it creates many practical challenges for the taxpayers as well as the tax collectors, he explained.
Further elaborating the salient features of NSTR, he stated that the system will act as a single repository for all domestic transactions and invoice management. It will automatically apportion input tax, prepare the return, and work out tax payable to each of the relevant authorities. The new system is based on the IRIS platform, which already has much built-in functionality. The new system has linkages with POS transactions as well as Track & Trace which will contribute significantly not only to broadening the tax base but also in ensuring the ease of doing business.
He continued that FBR was moving fast towards developing a similar National Income Tax Return in order to facilitate taxpayers and, simultaneously, maximize tax compliance. He concluded by reiterating that these innovative and out-of-box digital interventions were primarily meant to enhance Tax-to-GDP ratio to 15 % over the short term.
Meanwhile, as a sequel to E-Kutcheries held regularly to comply with the directions of the Prime Minister of Pakistan, Chairman Federal Board of Revenue (FBR)/Secretary Revenue Division, Dr. Muhammad Ashfaq Ahmed held yet another Weekly E-Kutcheri at FBR (HQs) on Friday to listen to the complaints and concerns of taxpayers. This is the fifth week of holding E-Kutcheri by the Chairman FBR after he decided to hold it on every Friday to expedite redressal of grievances of taxpayers.
He listened to the complaints of the taxpayers and issued on-spot directions for immediate resolution of complaints. He also advised the taxpayers to visit their nearest RTO and Collectorate of Customs for redressal of any problem confronted by them.
The Chairman FBR appreciated the suggestions put forth by the taxpayers and assured them that their valued input would be duly considered for formulation of tax policies and initiatives for taxpayers’ facilitation. He reaffirmed that FBR was making all out efforts to facilitate the taxpayers. The Chairman FBR has already issued specific directions to all Field Formations for according top priority to the grievances and concerns of female taxpayers and those belonging to remote and marginalized areas of Pakistan. Needless to add that the weekly E-Kutcheri being held by Chairman FBR on regular basis will not only contribute significantly to the timely redressal of the grievances of taxpayers but it will also keep a strong check on the performance of the Field Formations.
Chairman FBR has already instructed all field formations to resolve the outstanding issues of taxpayers and made it clear that any negligence in this regard will not be tolerated.