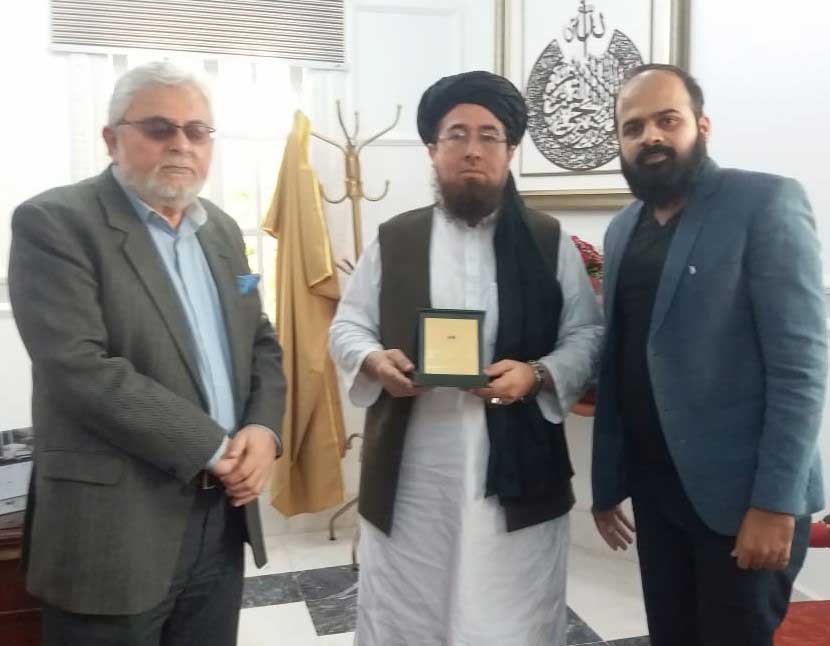 KARACHI: Zubair Motiwala Chairman PAJCCI called upon Saeed Abdul Jabbar Acting Consul General of Afghanistan on to deliberate matters of mutual interest. Chairman PAJCCI shared the activities and initiatives of PAJCCI in raising the voice of business community of both sides, providing insights to both the Governments and bringing issues on the table with objective of beneficial and long-term resolution, says a Press release.
He shared the recent achievements of PAJCCI including sales tax abolishment by GOP on Afghan fresh fruits and vegetables, Afghan rationalization of taxes on Pakistani containers and access to CARs, open access to Afghan trucks in various cities of Pakistan, medical and educational facility to Afghan nationals, provision of bank accounts and mobile connections for Afghan businessmen, improvement of infrastructure at border crossings, coordinating with various GOP institutions to consider special status and situation of Afghanistan while formulizing policies.
Despite international pressure the efforts of Pakistan Government were also highlighted in bringing the attention of international community and more specifically the recent OIC Session held in Islamabad resulting in humanitarian aid and support for the people of Afghanistan. He informed that honorable Prime Minister Pakistan takes personal interest in raising the voice of concern on behalf of Afghan people at all global forums.
His Excellency Acting Consul General informed that this is a challenging period for Afghanistan due to blocked funds, harsh weather and shortage of basic utilities like food, clothing, staples, health care and cash crunch which is making life unbearable for Afghan people. He urged PAJCCI to communicate to the Government that trade should be in PKR and AFN instead of USD due to non-availability and cash crunch in Afghanistan. He established that Government shall come up with a solution by either establishing SBP counters on borders or Pakistan’s exports can be paid off without conversion directly in PKR to avoid using double conversion from USD to AFN and vice versa.
Afghanistan considers Pakistan as first trading partner and looks toward Pakistan for help and support by enhancing the trade volume. He also requested that Business Community to set up a fund and help people in Afghanistan by working with Afghan Reliefinistry. Pakistan business community can directly bring cash and purchase food and warm clothing in Afghanistan and donate locally instead of bringing from Pakistan.
He informed that Afghanistan has huge mineral and coal deposits along with diversified fresh products which Pakistan needs and the gap left by Indian products can be easily filled by Pakistan; providing revenue and high trade volume for both countries.
He appreciated current and past support of Pakistan which has hosted over 30Mn refugees for past 40 years and has provided shelter, healthcare and education.
He requested help from Zubair Motiwala to use his good offices to release stranded Afghan containers in Pakistan and to initiate humanitarian fund set up.
Zubair Motiwala informed that PAJCCI has written a letter to Afghan government for their support in resolving issues of business community however the reply is awaited and request CG’s help in moving the communication forward. He also asked that PAJCCI Delegation be allowed to visit Afghanistan to carry out meetings with Afghan trade bodies and ministries.
It was mutually agreed that all initiatives will be taken to bring both countries together in rebuilding of not only trade but social and cultural relationship by involving all stakeholders and forums like PAJCCI can play an instrumental role in economic and people to people contact.