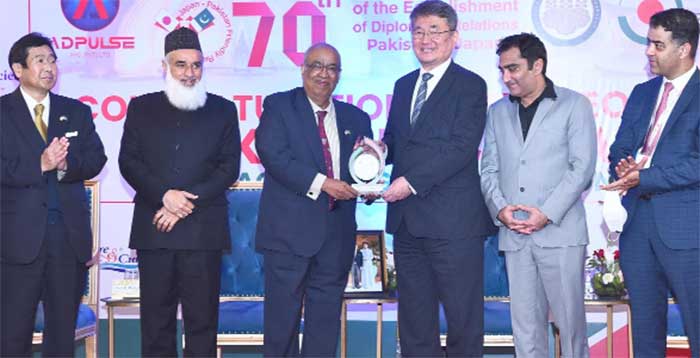 KARACHI: The 70th anniversary of friendly relations between Pakistan and Japan, the year 2022 mark the celebration of “Japan- Pakistan Exchange Year” to further strengthen the bilateral relationship between Pakistan and Japan, says a Press release.
In order to establish the diplomatic relations between Japan and Pakistan, the Government of Japan has announced the official logo for this special occasion signifying historic relations between Japan and Pakistan.
Both countries established regular diplomatic missions on 18th April 1952, just 10 days after the ratification of the Japanese peace treaty. Therefore, Pakistan established diplomatic and trade contacts with Japan since 1948 – long before Japanese sovereignty was restored.
There are over 80 Japanese Companies now operating in Pakistan providing employment to over 10 thousand households helping the government exchequer annually with over 60 Billion Rupees in taxes. In the industrial sector, Japan leads the automotive sector with almost all known Japanese brands with their presence.
Consul general of Japan Toshikazu Isomura addressed we really hope for good and expect a strong bilateral relationship with Pakistan, Pakistan and Japan have completed 70 years Diplomatic relationship its good sign of future relations.
This Outstanding occasion organized by Khurram Jaffrani CEO of Adpulse and his team that promised its commitment to promote Japan over their years of commitment by organizing a round table conference on the 65th diplomatic anniversary.
This was the day when PJBF celebrated their 20th anniversary commitment. Today by the grace of Almighty Allah we are celebrating 70th anniversary of diplomatic ties.