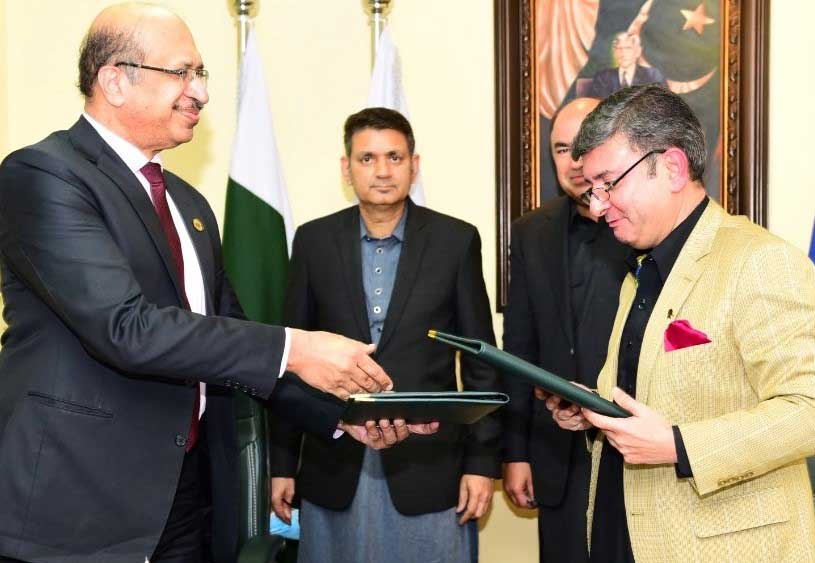 ISLAMABAD: After the successful launch of its digitized National Sales Tax Return last month, FBR achieved one more milestone as the country’s premier revenue collection organization has signed a MoU with Central Board of Revenue (CBR), AJ & K to extend its application to the territorial jurisdiction of AJ&K. In a simple but graceful ceremony, the MoU was inked by Dr. Ashfaq Ahmad Tunio, Member (IT), FBR and Shakeel Qadir Khan, Chief Secretary/ Chairman CBR (AJ & K), at FBR (HQs) on Friday afternoon. The ceremony was witnessed by Chairman FBR/Secretary Revenue Division, Dr. Muhammad Ashfaq Ahmed and Commissioner Inland Revenue (AJ & K) Zafar Mahmood Khan.
In his welcome note, Chairman FBR congratulated Team FBR for successful launch of National Sales Tax Return in (AJ& K). He also thanked Chairman CBR (AJ&K) on signing of a historic MoU which promises a paradigm shift in the way sales tax returns are filed by taxpayers of AJ&K. He termed it a watershed initiative and a big leap forward to maximize automation and taxpayers’ facilitation who would be able to file their returns for Sales Tax and FED electronically.
Addressing on the occasion, Shakil Qadir Khan thanked team and Chairman FBR for providing this momentous opportunity to the government & taxpayers of AJ&K in integrating their economy with the Federation of Pakistan. This will usher in a new era for ensuring ease of doing business for the residents of AJ&K as well as the 1.5 Million Kashmiri diaspora settled in England, Europe and other developed countries, he concluded. It is pertinent to share that there are about 63,500 registered taxpayers in AJ&K, out of which 1002 are also registered for Sales Tax and 40 are registered with WEBOC. The National Sales Tax Return will facilitate all those taxpayers who are engaged in sales taxable activities.
The need for a National Sales Tax Return was felt long ago, but only recently, FBR had signed agreements with the provincial authorities to work together and prepare this return for the facilitation of taxpayers. Previously, a taxpayer had to get registered and file Sales Tax Returns in each of the areas where he was supplying goods or services. Thus, someone operating in all four provinces and AJ&K had to file six different returns each month to the different revenue authorities. This caused great hardship and increased compliance costs of the taxpayers. Likewise, it was also a very tedious and cumbersome task which often led to errors and disputes. The National Sales Tax Return has eliminated many of these issues.
The salient features of National Sales Tax Return include entering the sales data by the taxpayers only once, instead of multiple times. Furthermore, the system acts as a single repository for all domestic transactions and invoice management. Similarly, the system automatically apportions input tax, prepares the return, and works out tax payable to each of the relevant authorities. This automation eliminates repeated tedious data entry, manual calculations, and errors.
The new system is based on the IRIS platform, which already has many built in functionalities. For example, notices, assessment orders, refunds, exemptions, and legal management system are already incorporated. The IRIS platform has proved to be very robust over time, and is being further improved. The new system has linkages with POS transactions as well as Track & Trace.
The benefits of National Sales Tax Return include simplification of tax filing procedures, thus, helping taxpayers to save time, effort and facilitating taxpayers to promote ease of doing business and reducing compliance costs. It minimizes data entry, and addresses the common issue of data and calculation errors. It is easily manageable and officers of all the revenue authorities will be able to make better informed decision regarding tax matters of the taxpayers. Moreover, It will also enable tax collectors to maximize revenue potential and tax compliance without audits. It will encourage harmonization of tax procedures, definitions and principles between the federal government and the provinces.
The senior officers of FBR including Member PR, Ms. Shahnaz Maqbool, Meber (IR Policy), Afaque Ahmed Qureshi, Chief PR/Director Media, Asad Tahir Jappa, Chief (Reforms) MKhalid Jameel and officers of CBR (AJ & K) were also present in the ceremony.